Every time we drove on soi Thonglor; we noticed a shop house/ restaurant that is designed to look like a shop house in Phuket town. It looked so interesting that we decided that we had to try to the food. The name of the restaurant is of course...Phuket Town. 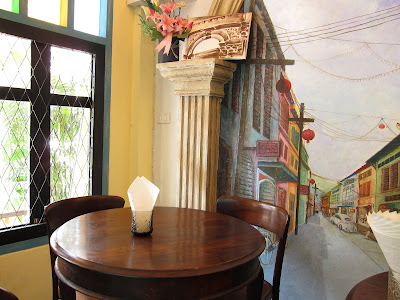 The interiour of the restaurant has old world charm. The mix of colonial/ Chinese & local Phuket furniture and decorations made up the atmosphere...you actually feel like you are in Phuket town. Even the murals on the walls are painted scenes the good old days of Phuket town. 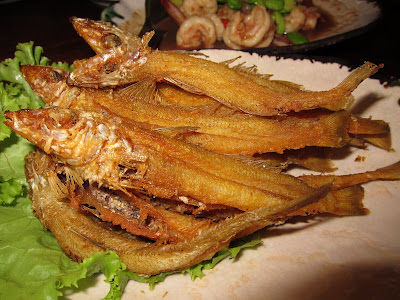 The first dish was Deep fried Sea bream with cumin (220 baht). These little rascals are one of my favourite dishes in Phuket. It was not often we could find them on the menu when we were in Phuket but when we did find them...we had to have them. At Phuket Town, we were not disappointed. The fish were deep fried to a golden brown; the fish was crispy on the outside but very tender on the inside. The great flavour of the cumin was so evident. Such an amazing dish. 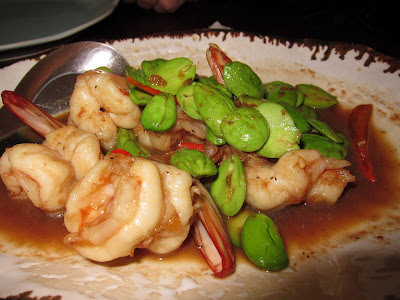 The second dish was Stir fried Sa-Tor with shrimp in shrimp paste (150 baht small/ 170 baht large). This dish is not for everyone; because of the flavour of the Sa-Tor. It is indeed an acquired taste. Sa-Tor grows on very tall trees all over Phuket. The flavour is very very very bitter & has a very strange smell on top of it. However; for this dish, the Sa-Tor combined with the shrimp & shrimp paste tasted really good. The intense flavours and nice texturs (crunchy Sa-Tor and tender shrimps) were a good combination. 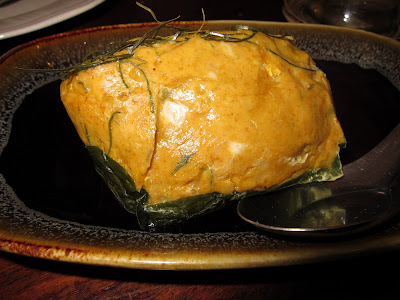 The third dish was Red curry pla-mong fish souffle served in banana leaf (65 baht). Another favourite dish...fish souffle. One of the best in Phuket is at Kan-aeng II; it is so so so yummy. So; we were so happy to order a true Phuket fish souffle. Thank goodness it turned out to be very good. The texture of the souffle was lovely; soft, tender & creamy due to the coconut cream. The combined tastes of sweetness & spiciness was just lovely. So So Satisfying. 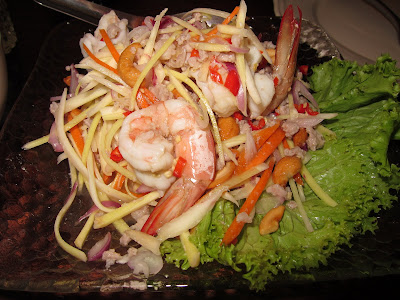 The fourth dish was White cumin spiced minced pork and prawn salad (150 baht). We introduced and started eating white cumin at a lovely & small restaurant in Chatuchuk Weekend market. So; when we saw this salad on the menu, we had to try it. Not only does white cumin have an intense flavour it is supposedly a good ingredient that fights cancer. This salad had great colours, textures and flavours. Another hit. 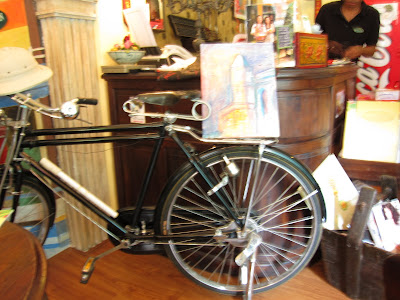 The bicycle truly adds to the charm of the place. It reminded me of the lazy & slow days of a a charming town where people biked around and there was no traffic. 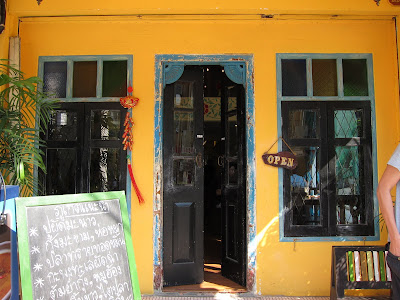 The front of of the restaurant is painted in bright happy colours...which is indeed eye catching.

Overall; a great secret on Thonglor. Charming atmosphere & ambiance. The service is discreet but efficient. The prices are so reasonable for the quality. The food is very authentic and delicious. It is not a very large place so when it gets busy it will be difficult to get a table...but it for sure will be worth it.

We read from the BK magazine that there was a new great restaurant on Thonglor at the 'Grass Complex'. The review gave the restaurant 4 stars out of 5. A friend of ours (who is a chef by training) also read the review so we all decided that we should try the place. 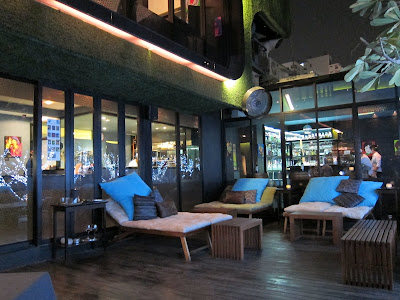 The restaurant is called Serenade. It is on the ground floor facing the parking lot of the Grass Complex. We decided to sit outside because the weather was not too hot. It was a mistake because we were eaten alive by mosquitoes. Those damn beasts! Luckily; Serenade had tons of mosquito repellent. The view from the terrace was of the parking lot...very nice view when dinning.

The restaurant comprises of two floors plus the outdoor loungey area. The building itself is a modern with exposed steel & glass as the core design. The interior decor was simple & nice but nothing special. The outdoor furniture was a strange mix of wood lounge beds and tables & chairs. 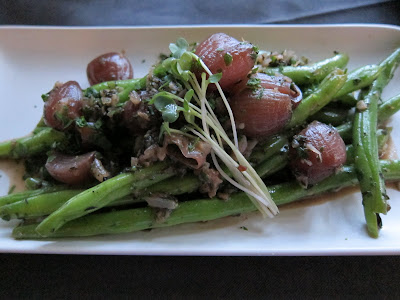 The first dish was Green bean shallots (123.19 baht). The green beans were cooked well and had a nice slight crunch to them. The shallot dressing was way too much; it actually overwhelmed the dish. Too bad; because this simple dish could have been really great. 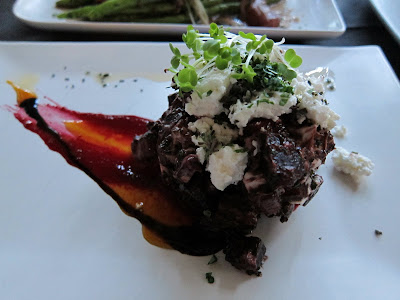 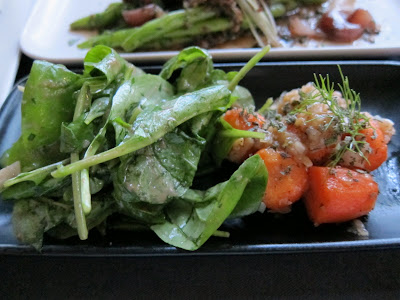 The next dish was Miso carrot (101.95 baht). The carrots were nicely cooked and had a nice slight crunch to them. The carrots were covered with a thyme dressing...and it was waaaayyyy too much thyme. The carrot & miso flavours were non-existent due to the over thymeing (I don't think this is a word, but it surely described the situation) of the dish. 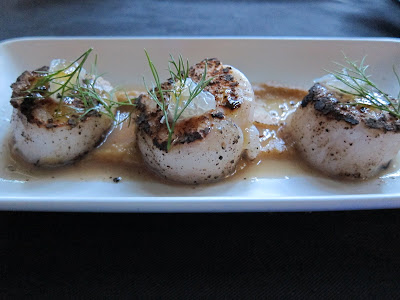 The next dish was Scallops (420.56 baht). The scallops were of good quality, cooked well and had a nice sauce to accompany them. However; we thought it was on the expensive side for 3 scallops. 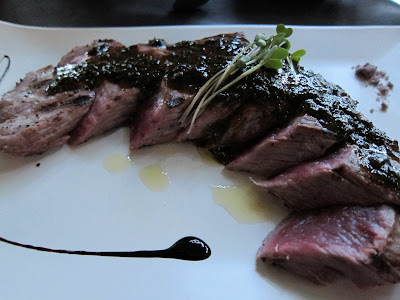 The next dish was Flank steak demi jao (237.89 baht). We asked for the flank steak to be on the rare side and that is how it arrived...nicely cooked, the meat had good taste but to our disappointment, the meat was on the tough side. I know that a tough piece of meat is not the restaurants fault; it can happen. 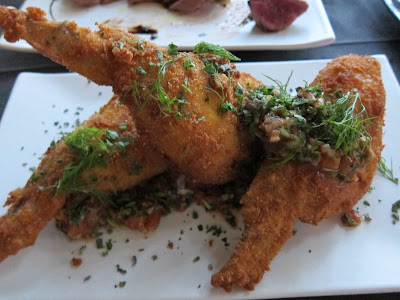 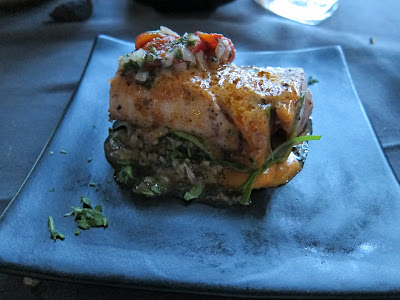 The next dish was Grilled cobia (242.15 baht). The cobia was cooked nicely but we felt it was cooked too long. We were also shocked how salty the dish was. We could not eat it so we asked the waiter to ask the chef why was the dish so salty.

The chef came out to apologize and to explain that the dish actually came with three different salt from different regions. The salt happened to be mixed in the dish which was not suppose to. Therefore; the extreme saltiness of the dish. The chef told us that he would make another cobia dish for us but the salt would be separated on another dish. That was really nice of the chef.

The cobia dish in the end turned out to be so-so. Nothing very special about it. 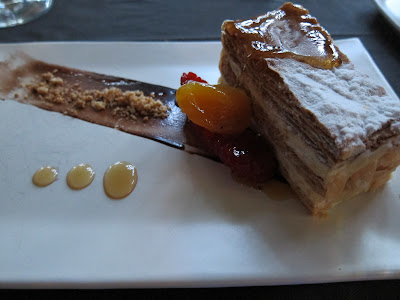 For dessert, a Napoleon (127.45 baht). The Napolean...a mille-feuile filled with an almond flavoured paste. The dessert looked nice but I would have to say that I was disappointed with it because mille-feuile was soggy when it was suppose to be crusty and the almond flavored paste was dried out. It was truly a sad sad dessert.

Overall; maybe all of us were very disappointed because we were expecting something totally wonderful since we all took the advice of the BK Magazine giving Serenade 4 stars out of 5. Four stars is suppose to mean that the Serenade is one of the 'best' or 'finest' restaurants in Bangkok. This is where we would all disagree very strongly.

The ambiance was so-so...sitting on the terrace you get to watch cars passing by and being parked all evening. OK; no one forced us to sit outside, so I will not even count the ambiance into this factor of this place being a 4 star place.

The food was so-so...there were some hits; such as the cooking of some of the dishes were good and the presentation of the food is nice. But; there seems to be a miss on the balance of flavours or tastes of the dishes. Most of the dishes were overwhelmed by one major ingredient; just way too much of it so that it erased any sign of any other food on the dish.

The service was efficient but the male restaurant manager/ waiter was not friendly. I don't know why that was, but since the place was empty, he could have faked it at least.

This was a really big disappointment for us because the hype around this place was strong and the reviews I have read are all fans. Well; at least we tried it for the first time but I have to say it was also our last time.

On top of all this (sorry; another long story to add to this post); when we got our car from the Valet; the Grass Complex gangsters asked us to pay 200 baht. We asked why and they say the policy of the Grass Complex is that...after 10:00 pm, it cost 100 baht per hour.

We could not believe it; because first we got a stamp from the restaurant on the valet ticket they gave us. We left around 11:20; so it was not two hours. But the f # @ k * + g nerve of those gangsters to cheat us. We told them that we ate in the complex and got a stamp and that should have allowed us to park for free. We refused to pay and the valet idiots blocked our car.

The Serenade manager/ waiter was leaving the premises on his motorbike and stopped to talk to us; so I thought he would help us. Instead he told us that it was not the restaurants policy and it was the Grass Complex policy so we had to pay. We said 'NO'! So; he said told the Grass valet idiots to let us go and he was angry with us.

In my opinion; the Grass Complex will not work out. The restaurants in the complex will have a hard time surviving if the policy of the place is non-sensical & idiotic. Most restaurant in the complex are already empty most nights. The Grass Complex had a good concept but in the end they are trying too hard to be hi-so and that it is really sad and a big joke. Let's see who will have the last laugh.