The name of the new restaurant is Smith.  At first I was like you...Smith?  Why on earth is the restaurant called Smith?  Then we heard that Smith comes from the word key smith, shoe smith, metal smith, etc. so they wanted to be known as food smith.  I thought it was clever. 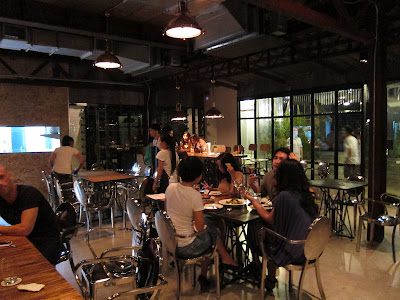 The design is pure industrial feel and look; the combination of industrial steel, concrete and old wood, makes the place feel masculine and bold.  Everything from the furniture to the stair case has an amazing style and design element to them.  The room is dark with strategic spot lights here and there to give the place a moody glow. 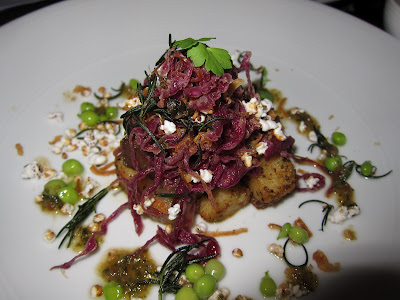 The first appetizer was Calf's Tongue (180 baht).  This dish comprised of shredded calf's tongue with Mexican spice, pressed cabbage, millet & shallots.  The ingredients were fresh, good combination of colour, textures and flavours.  The only issue with the dish was that the Mexican spice overwhelmed the dish and it was too salty.  If Mexican spice is this strong and salty; they need to figure out how to use less so that it adds to the dish and not distract from it. 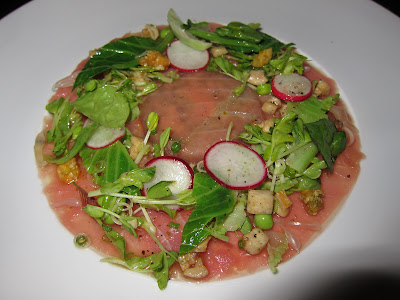 The second appetizer was Tuna, Braised Pig's Tail & Fois Gras Torchon (250 baht).  This dish was consisted of braised pig's tail and fois gras underneath the tuna and foraged vegetables, rosemary, citrus & peas.  Beautifully presented, the ingredients were fresh and vibrant in colour.  The taste and texture combination of cooked, raw and semi raw ingredients were lovely. 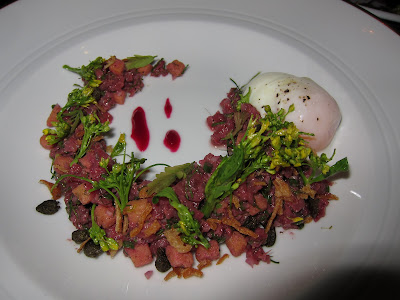 The third appetizer was Steak Tartare (250 baht).  This dish consisted of raw beef and a 65/65 slow cooked with egg, crispy capers & garden herbs. Nicely presented and well crafted.  The raw beef was of good quality and the ingredients well blended into the beef.  Good texture and flavours.  The only issue with this dish was that the slow cooked egg was also supposed to be blended into the tartare for extra flavour....but it was overcooked.  So, it was like trying to blend in a boiled egg into the tartare; you can imagine how difficult that was, so we just ate the egg separately. 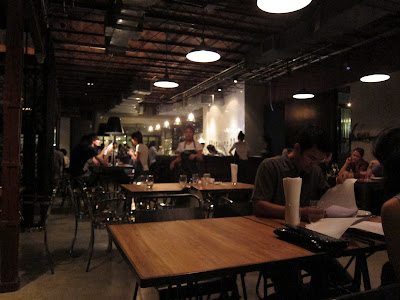 Each table and chair is specially designed for the restaurant.  This kind of attention to detail helps Smith stand out and have its very unique charm and personality. 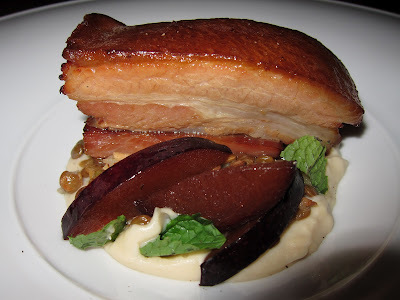 My friend's main dish was Verjus Glazed Pork belly (350 baht).  This dish consisted of a large chunk of pork belly with pickled stone fruit, spicy lentil, mint & coriander.  The pork belly was huge and well cooked...it was soft, tender and juicy.  I am not a fan of 'fat' so pork belly is a difficult dish for me to eat, but the meat itself was so so yummy. 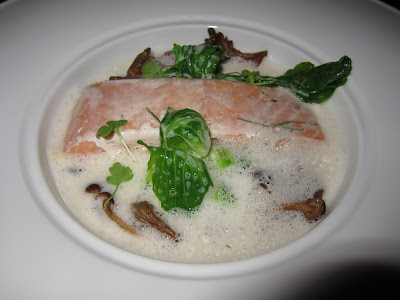 My main dish was Lightly Smoked Salmon (395 baht).  This dish consisted of slow cooked smoked salmon with lime-creme fraiche froth, foraged mountain mushrooms & summer corn.  The salmon was cooked perfectly and the smokey flavour was evident.  The froth added a lovely but light flavour and texture.  The combination of the soft salmon with the more dense mushroom and corn was very nice. 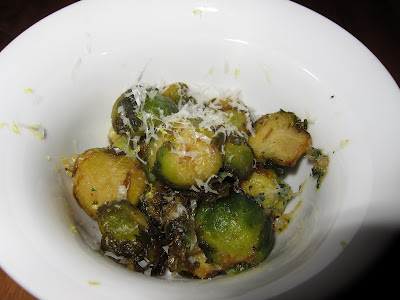 We shared an order of Brussel sprouts & parmesan (120 baht).  We love brussel sprouts.  It was a second thought but I decided to order a side dish to accompany our meal.  The brussel sprouts arrived at our table in less than 10 minutes and I was already suspicious...and I was right to be so.  The brussel sprouts were cooked in advance and have been sitting in the frying pan all evening.  They were wilted, over cooked, dry and in a very sad & sorry state.  This was the most waste of money, time and space of a dish. 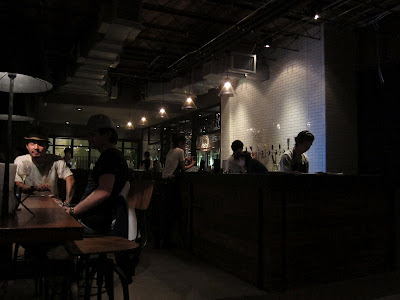 I forgot to mention that you need to call Smith if you want to get a table.  I actually went to Smith on a friday afternoon to reserve a table for that evening.  The very nice hostess told me that it was already 100% full.  I was very surprised.  She said that I should reserve a table for Saturday night but I should call before noon because the place will fill up very quickly.  My first reaction was...'WOW', this is not Bangkok anymore but more like NYC.  Reserving a table a day in advance for a table in Bangkok is very rare. 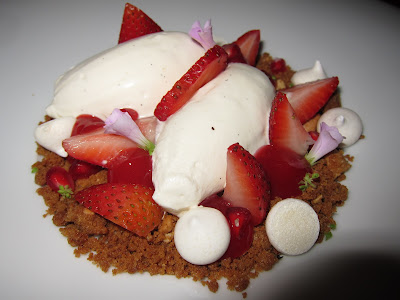 The shared dessert was Eton Mess (180 baht).  The dessert consisted of red berries, praline crust & fresh cream.  It sounded really nice from the menu; but for some reason it did not live up to its description.  The red berries were abundant and flavourful, but the praline crust was not effective in adding flavour dot he dish.  The fresh cream was room temperature which for me does not cut it.  The dessert is suppose to be composed of not not only colour, textures but also temperature.

Overall; the food was not 100% perfect, but non-the-less, it was still very good. There was a spice that overwhelmed a dish, or certain items that were over cooked, or an item that had more creativity put into it than rather than focusing on the execution.  However; the attention to freshness, presentation and good quality ingredients were evident and made up for the faults.

The unique decor and atmosphere was a great addition to the Bangkok dinning scene.  But Smith did not just do it because this kind of concept was missing; they really put a lot of thought into the concept and executed it with fine detail.

The prices for the food & drinks are very reasonable; especially for the quality of the ingredients.

The service was very nice and attentive; which was surprising since the place was 100% packed.  I have to congratulate them on the attentiveness of staff .  However; where they can improve is how they should not up-sale the menu...it really leaves a bad taste in the mouth because it felt like they were trying to cheat us.

Here is my short story made long...there was a Slow-Roasted lamb ribs for 2 on the menu.  I did not really pay attention that there were actually 2 different weights of lamb for 2 people...one at 1 Kg. for 1750 baht and the other was 1.5 Kg. for 2350 baht.  We decided we wanted to share the lamb ribs and I ordered it.  The waitress wrote it down and repeated our order.  Then my friend reminded the waitress that we wanted the 1 Kg. lamb.  The waitress said the 1 Kg. lamb out of stock and they only had the 1.5 Kg. lamb.

We were very upset about this...she should have told this to us right away instead of assuming that we could eat that much and that we were willing to pay that much.  So; we decided to order something else.  If it was not for my friend paying more attention to the menu than me; we would have had to eat lamb for several days due to the left overs.  This was not nice of the waitress and even dishonest.  This truly left a bad taste in the mouth with this experience.

In the end; we for sure will return to Smith; they just recently opened so for sure there are faults; but I am sure they will be cleared away as they get more into their stride (I hope).   The ideas and concept behind the place are unique and good; so for sure, Smith will be a popular place for a long time.