Wine Me Up @ Seen Space

So; we decided to leave the car where it was and walk to Wine Me Up for dinner.  We have never been there, so the opportunity to do so had arrived. 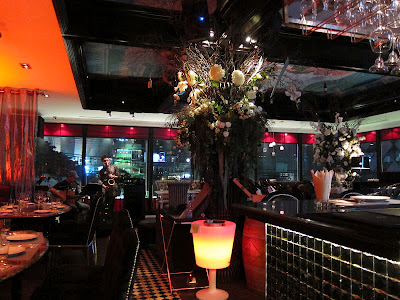 Its hard to describe the decor of Wine Me Up because it is trying too hard to be chic & stylish that in the end its an overload to the senses.  The decor is a mix between a go-go night club, a discoteque, a jazz club and a hotel lobby.  The main colour theme was red, black and white.

The thing I hate the most is a restaurant that has a band that plays while you are trying to eat & talk...and behold Wine Me Up had a band playing.  I am no expert on music; but oh my, oh my was this band awful.  The singer was so out of tune; but when he tried to do the high notes...I was scared that my wine glass was going to shatter (or my ear drum).  It was loud, abrasive and simply unjoyful to sit there to be tormented like that. 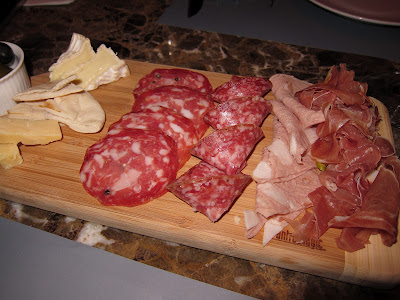 We shared a platter of Tapas set (380 baht).  The tapas was a selection of Italian cold cut meats like Parma ham & salami and some cheese.  It was a good portion for two, the meats were good but what was disappointing was that the cheeses were on the very dry side and that they served the platter with pita bread (was not even toasted), which was a waste of space because it was dry and tasteless. 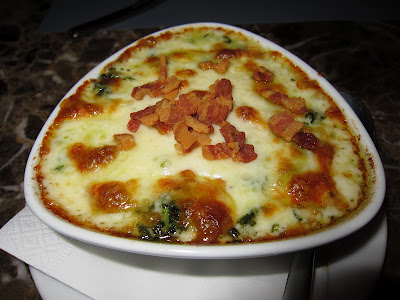 We also shared a Spinach Cheese Bake and Grilled Scallop (120 baht (I think)..I actually forgot but it was not expensive at all).  The dish was a good portion for sharing.  The combination of the melted cheese, the spinach and scallops were good very good. 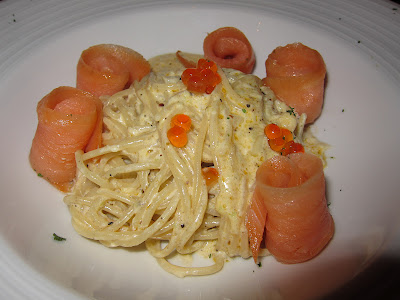 I ordered the Spaghetti Smoked Salmon and Wasabi Cream Sauce (320 baht).  The spaghetti was cooked perfectly...the wasabi cream sauce we rich & thick and the full flavour of the wasabi came through.  However; I thought the sauce was too creamy to the point of sickening...which is no fault of the restaurant; because the description on the menu did say 'cream sauce'.  The salmon was of good quality, was plentiful and added the saltiness to the dish. 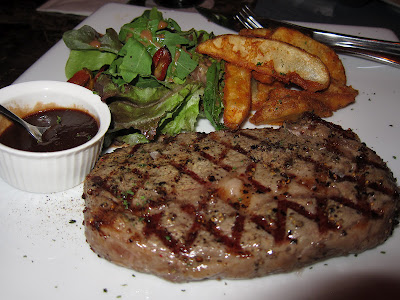 My friend had the Rib Eye with Red Wine Sauce and Potato Wedges (820 baht).  The piece of meat was of good quality.  It was cooked as asked, the meat was tender & juicy.  Nothing extravagant to this dish but this is proof that if you use good quality products...the more simple the dish, the better. 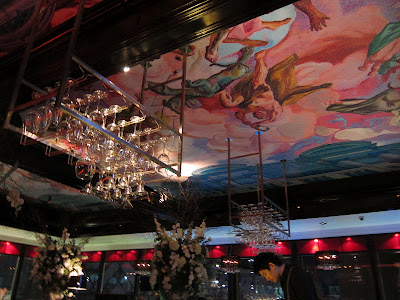 The ceiling of Wine Me Up is depiction of some Godly intervention or a Mythological battle (I was not sure which one it was).  But; it does show a lot of effort to add some kind of artistic element to the place. 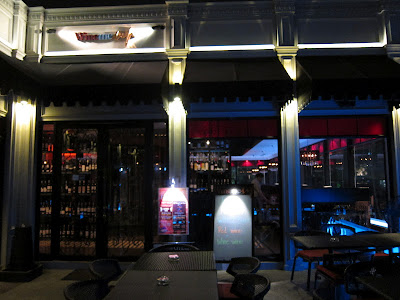 The entrance to Wine Me Up which is on the third floor of the Seen Space Mall.  There is also outdoor sitting for smokers. 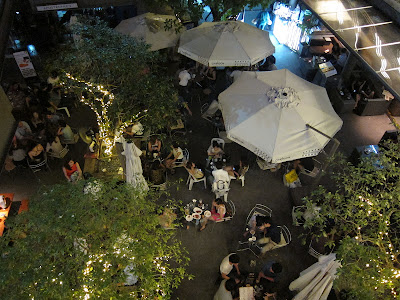 The view from Wine Me Up of Fat-R Gutz beer garden below.

Overall; the food was good; nothing outstanding, but good.  No issue on the quality of the produce, how the food was cooked and presented.  The prices are very reasonable.  The service is friendly and efficient.  The decor is over-the-top and the ambiance is just waaayyy tooo noisy with the awful band.