Zuma opened about two years ago in the St. Regis hotel. There was big hype and buzz about Zuma coming to Bangkok.  If you are foodie; you would have heard about Zuma because it was the 'IN' place for trendy Japanese food and atmosphere from London, Miami to Hong Kong.

However; there was scepticism of a place like Zuma working in Bangkok for the simple fact that there are already tons of amazing Japanese restaurants in town.  The other rumour buzzing in town was..."who was going to pay those kind of prices" (everyone was assuming that the prices would be out of this world) to eat trendy Japanese food and sit in a trendy Japanese inspired atmosphere?

To be honest; those were the reasons that have kept us away from Zuma since they have opened.  However; we finally decided to stop listening to rumours and try Zuma ourselves to make our own decision if the place deserves or not deserve the bad rumors.

We decided to go for lunch since we were in the area.  We read that they had a special Sunday lunch menu at 780 baht ++ per person.  Zuma was offering Hotei...Zuma signature lunch; where you chose one item from a three course menu (the dishes are meant to be shared). 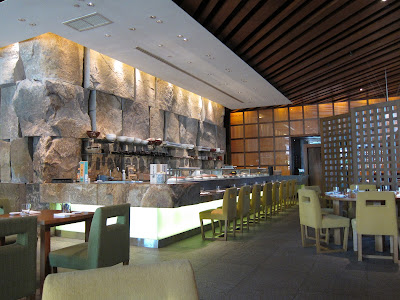 The concept of Zuma comes from chef Rainer Becker who opened the original Zuma in London.  He was inspired from the easy-going Japanese izakaya way of eating.  So, Zuma combines the Japanese way of cooking and Japanese aesthetics in design and modernises it.

The space of Zuma is huge...high ceilings, the volume of the space is impressive for a Japanese restaurant, there is outdoor and indoor dinning, there are different sections for dinning.  Key focus of the design of Zuma are the open show kitchens including sushi and robata counters.  Of course since Zuma is also a trendy hang-out; there is a bar where the trendy cocktails are made.

There is extensive use of natural materials; which is so Japanese, such as huge granite stones and dark wood.  The key colours are olive and lime greens for the chairs which blended well with their surroundings.  The flow and feel of the place is very natural. 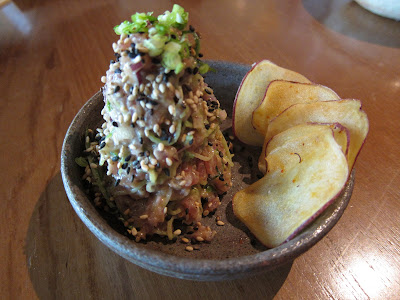 My friend's starter dish was Maguro no taru taru (yellowfin tuna tartare with barley miso and wasabi dressing).  OH my; what a shocker of a dish.  The yellow tuna was so fresh, the texture was incredibly velvety and the flavours of miso & wasabi was a perfect combination. 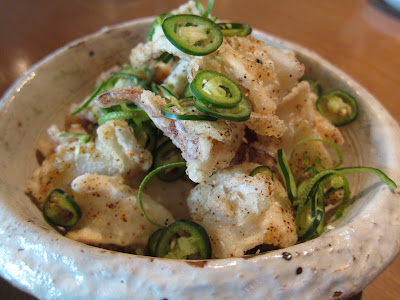 My starter dish was Ika no kari kari age (crispy fried baby squid with green chili, lime and sea salt).  The baby squid was so fresh that it was tender and not chewy.  The squid was lightly coated and was deep fried perfectly.  The combination of chili, lime & sea salt is one of the most basic ingredients for seafood and it was absolutely lovely for this dish. 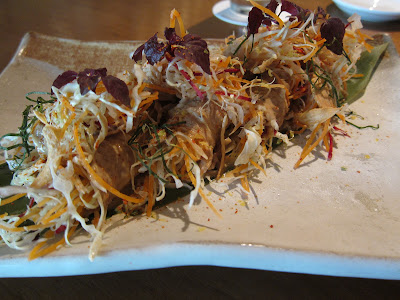 This dish was offered to us by the restaurant manager.  The manager realised that this was our first visit to Zuma so he wanted us to try another special dish from the menu.  This was one of the dishes under the 'Zuma new dishes' list.  The dish was Buta bara no shabu shabu salada (pork belly salad with cabbage and sesame ponzu dressing).   What can I say about this dish?  Devine...it first looked like a mess on a dish; but at closer inspection, it was a piece of art.  The combination of textures, colours and flavours made this dish stand out. 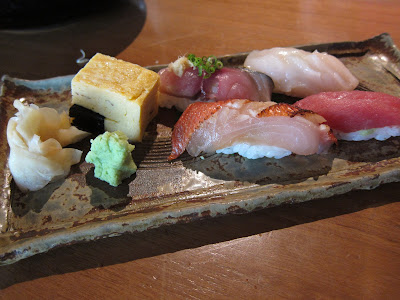 My friend's second dish was Tokusen nigiri (5 nigiri selection).  I was not impressed with the sushi selection.  The fish was fresh and the fish tasted good; but this is where I have to say 'penny wise pound foolish'.  I am not an expert on sushi; but I am sure there must to be a proper ratio where the fish on the sushi must be higher percentage of the rice.  Or am I wrong here???

I felt that they were too stingy on the fish on the sushi; so it was a let down somehow.  If Zuma would have thought differently....for example; by thinking that by giving the customer a little bit more, the impressions the customer will have about Zuma would be so much better & long lasting than trying to save a little bit of money in the short term. 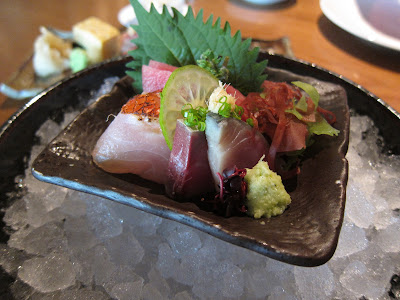 My second dish was Sashimi moriawase (3 sashimi selection).  The same goes for the selection of sashimi; this was not a lunch portion of a menu course but more like an amuse bouche portion...I am not joking. 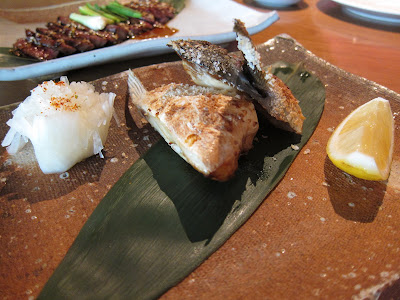 My friend's main dish was Hamachi kama no shioyaki (salt grilled yellowtail cheek with pickled daikon).  The hamachi was so so so fresh and so so so good.  The fish was cooked perfectly where the skin slightly crispy and the inside was tender.  The salt and a squeeze of lemon added the right touch for such a simple but beautiful dish. 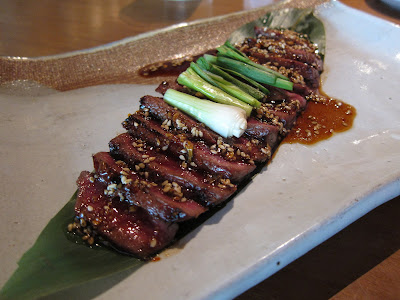 My main dish was Gyuhire sumibiyaki karami zuke (Australian beef tenderloin with sweet soy, sesame and red chili).  The beef tenderloin was cooked as ordered, the beef was so so tender and juicy and the beef tasted out of this world.  Amazing! 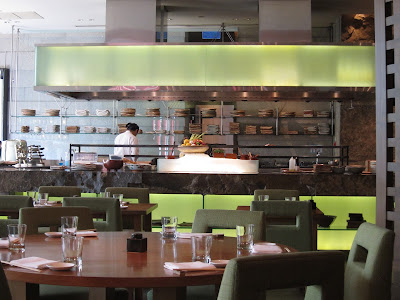 Overall; Zuma surprised us in term of the quality of food, the beauty of the dishes served, the very good & attentive service and beautiful atmosphere.  All were a great combination.   The price for lunch was actually not that bad for the quality of food and service.

I know I can be meanie when it comes to portion size...yes, I do eat like a pig.  But, I believe that people should get what they pay for.  Small servings does not help anyone...it gives a bad impression to the customer and it does not build loyalty for the restaurant.  I do hope Zuma rethinks about this aspect.

We are now very curious what dinner will be like at Zuma; I am sure the atmosphere will be very different but the food just as wonderful...so for sure we are going to experience that as well one of these evenings.

We have heard that a very good Indian restaurant existed on the second floor of the '8' building on Thonglor.  I am no expert at Indian food and I rarely eat it.  So it was time to try something different.  The name of the restaurant was Masala Art. 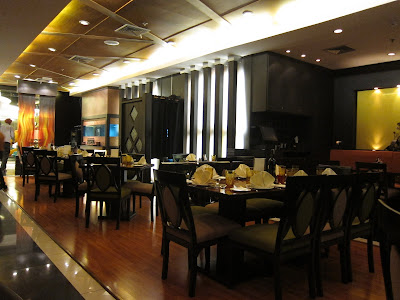 The restaurant is long with many tables.  What decor is refreshing for an Indian restaurant...it really breaks from the typical overly decorated Indian restaurant.  Masala Art still stays true to the Indian splash of bold colours but has toned it down a bit with such colours as burnt orange, dark green and pale beige.  The walls have a touch of gold and the dark wooden floors to round out the warm mood & tone of the place. 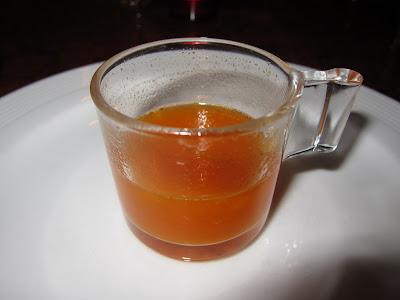 Amuse bouche of tomato & spices broth.  Such a small cup of broth but had a strong punch of flavour.  It was very tasty and refreshing. 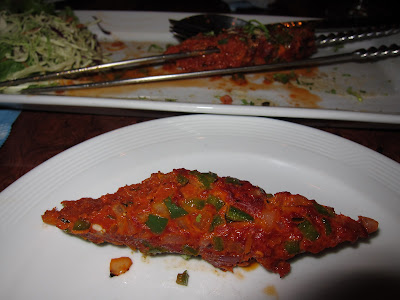 The first dish was Peshawari Seekh Kebab (375 baht).  The minced mutton with tons of spices then cooked in the tandoori oven was so so yummy.  The mutton was of good quality and had good texture, the dish had loads of colour from the ingredients and was a good portion to share. 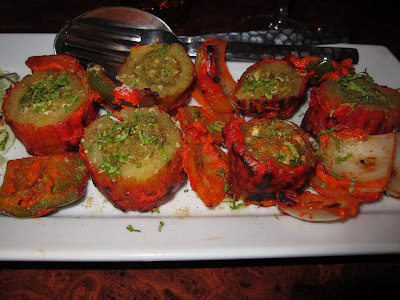 The next dish was Tandoori Aloo (250 baht).  Who would not like potatoes marinated in tandoori powder, garlic paste and yoghurt then cooked in the tandoori oven...we for sure enjoyed this dish.  The potatoes were soft and tender and each one bursting with flavour. 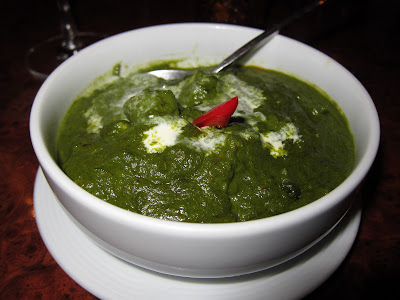 The next dish was Saag Paneer (275 baht).  The spinach and Indian farmer's cheese was a lovely combination.  The dish had creamy, velvety and smooth texture.  A cool and soothing dish that counter balanced the curry dishes. 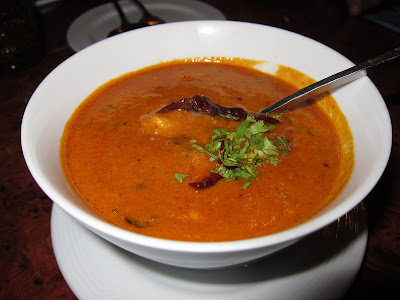 The next dish was Fish Goan Curry (395 baht).  This curry dish was fire red in colour but thank goodness it did not match in terms of spiciness (the spiciness was just right).  Well balanced in flavour and tons of flavour might I add...however; with a curry like this, the fish only plays a minor character.  The fish was pretty much used just for texture.  A really tasty dish. 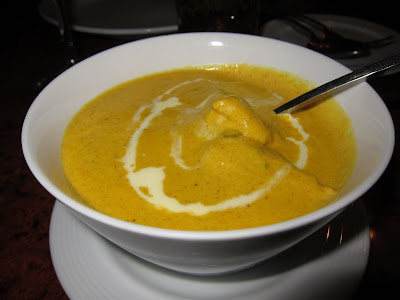 The next dish was Korma Chicken Curry (320 baht).  Talk about a curry that explodes with flavour.  No wonder....a curry that has so many spices but with yoghurt to smoothen & thicken the curry; its a recipe for success.  The chicken was of good quality and was tender.  A lovely dish. 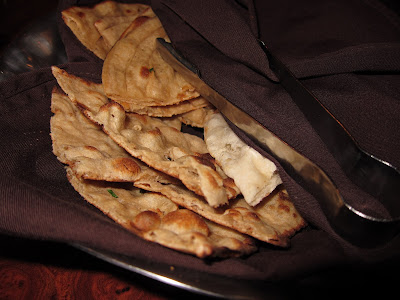 The Plain Nan basket (150 baht) that accompanied the food.   One way to test an Indian restaurant is by their Nan...you can always tell if they use good quality flour.  Thank goodness; the nan at Marsala Art was very good.  Slightly crusty and crunchy on the outside but tender and soft on the inside.  Just lovely with all the curries. 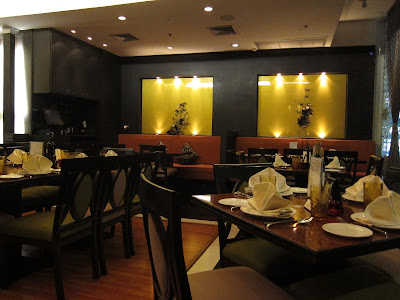 Overall;  we were pleasantly surprised at the quality and how good the food was at Masala Art.  They used very good raw ingredients and spices.  The dishes were good portions to share.  The prices were not cheap but yet it was not too expensive either.  Its about the same everywhere in town for Indian food.

The service was a very friendly and helpful...however; they were too pushy in trying to up-sale on dishes (which I really really hate).  Its like treating customer like idiots.  But; were were nice and told the wait person we needed time to decide from the extensive list of choices on the menu and if we had questions, we would ask.  The wait person understood and left us alone for a few minutes to look at the menu.

I seldom think of eating Indian food but if I ever have a craving for it...Marsala Art would definately be a choice.